← back to
Whirlwind Recordings
Get fresh music recommendations delivered to your inbox every Friday.
We've updated our Terms of Use. You can review the changes here.

'Authority Melts From Me' - Album Trailer

Authority Melts From Me 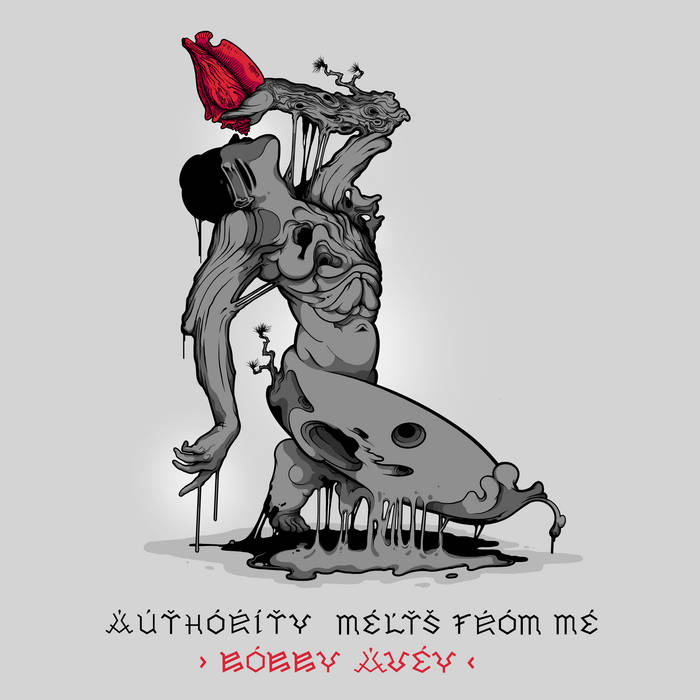 Authority Melts from Me is the new album from Bobby Avey, praised by the New Yorker magazine as "A young pianist of invention and refinement." Winner of the 2011 Thelonious Monk Competition for composition, Avey also received the 2011 'New Jazz Works: Commissioning and Ensemble Development Grant' from Chamber Music America, which enabled him to travel to Haiti to record a Vodou Ceremony in the small village of Soukri and subsequently create an hour-long suite grounded in rhythms found in Haitian Vodou drumming. This compelling suite of new music pays homage to the Haitian Revolution and features the immense talents of Miguel Zenón, Ben Monder, Thomson Kneeland, and Jordan Perlson.

Reprinted below are the liner notes from the album:

"Authority Melts From Me is a suite for quintet, inspired by my respect for the Haitian people, who have persevered through a tragic history of colonialism, slavery, and foreign occupation. This suite focuses particularly on Haiti's slave revolt--the only successful slave rebellion in recorded history--which led to Haiti's declaration of independence from its colonial master, France, in 1804. On the eve of the slave insurrection in August 1791, leaders of the rebellion conducted a massive Vodou ceremony at Bois Caïman in the northern mountains of the island to declare their intent to take over the Northern part of Haiti (then Saint Domingue). As Haitian scholar Madison Smart Bell writes: In Haitian Vodou, there is understood to be a great crossroads between the world of the living and the other world inhabited by the spirits of the dead. Vodou practitioners believe that the souls of the dead do not depart. Instead, they go into a parallel universe invisible to the living, but quite nearby – and not impossible to reach. Traffic through this crossroads defines much of Vodousaint religious practice.

In addition to a Vodou priest, Vodou drummers facilitate opening the gateway between the two worlds.

I have selected music from two Vodou drumming ensembles: the drummers of the Societe Absolument Guinin from Port au Prince, and the drummers from the community of Soukri, near the town of Gonaïves, whose ceremony I had the great honor of attending and documenting in January 2012. Since distinct Vodou traditions have been preserved in specific communities for hundreds of years, these ensembles have unique lexicons. Following a period of immersion, careful transcription, and analysis, I composed a suite of music utilizing rhythms and concepts found in these two drumming ensembles. The result is Authority Melts From Me.

The history of jazz has always been one of cultural variety and amalgamation of diverse traditions. I hope to be furthering that in a sensitive way by incorporating traditions of a county I respect. I hope to add something to the legacy of jazz that stays true to the aspirations of that music while incorporating a style that up until now has not been explored in this way. What I also hope is that this endeavor is creating further linkages in the relationships of the various branches of the African diasporic tradition.

My visit to Haiti in January 2012 made painfully immediate the conditions under which Haitians struggle. Even prior to the earthquake, 55% of Haitian households survived on the equivalent of 44 U.S. cents a day. Only 35% of students are able to complete primary school and only 4% graduate from secondary school. More than one in twenty people are HIV-positive, and nearly 1 in 5 children die before their 6th birthday. Such statistics only begin to convey the reality for much of Haiti today. Almost three years after the earthquake, nearly 400,000 Haitians braved Hurricane Sandy under tents and tarps.

What is very important for Americans to understand is that America has played a dominant role in shaping the current state of Haiti. The U.S. invaded and occupied Haiti from 1915 to 1934, training a brutal military force designed to suppress Haiti’s domestic population. The U.S. killed between 15,000 and 30,000 Haitians during its occupation and in building up the military, provided a force that has terrorized the country since. Haitian soldiers, serving elite interests, were essentially immune from the rule of law. They have also regularly overthrown governments, as Haiti has seen over 30 coups in its history.

America embraced the dictatorship of Francois Duvalier during most of his 14-year rule. Sociologist Alex Dupuy estimated that perhaps 50,000 people were killed during this reign of terror. America even more enthusiastically supported Duvalier’s son, Jean-Francois, who ruled for an additional 15 years. He kept taxes low and imposed starvation wages for workers, creating an inviting investment climate for U.S. companies.

In 1986, Jean-Francois was ousted. Following four years of turmoil that saw 11 different presidents and a populist movement in the face of military repression, Haiti held its first ever free and fair elections in 1990. One candidate, the populist priest Jean-Bertrand Aristide, won decisively with 67% of the vote with 80% of the electorate voting. He was overthrown in a CIA-backed coup seven months later.

In 2000, Aristide ran for president again, this time elected by over 90% of the vote. The second coup took longer to orchestrate but in 2004, the US kidnapped Aristide and flew him to South Africa.

The current international troop presence in Haiti, the arrival of which was orchestrated by the U.S. in the aftermath of the 2004 coup, has presided over eight years of human rights abuses. Two years ago, the U.S.-funded troops inadvertently yet carelessly introduced cholera to the country, which has killed 8,500 and infected nearly 700,000 as of this writing. Efforts are underway to demand accountability and reparations for this act of criminal negligence.

Despite the countless obstacles Haitians face, the short amount of time that I spent in Haiti made clear the resilience of the Haitian people is the country’s greatest asset. I hope my music will lead to greater understanding and awareness of Haiti among the American people and ultimately play some small role in inspiring thoughtful action to turn the tide of the relationship between the two countries."

"Authority Melts From Me is, indeed, powerful music with a message about the costs of freedom and the perils of foreign neglect and/or intervention. The music does not sweep away the misery but acts as a reminder of the power of native traditions in the time of upheaval."
Step Tempest

“With Authority Melts From Me, pianist Bobby Avey, armed with a sense of inter-cultural understanding that may actually be more keen than his mind-boggling musical skills, has forged a defining statement; one that captures many aspects of the life and times of the Haitian people past and present. He and his musical compatriots tell these stories unflichingly; without resorting to cliché or grandstanding. The history of Haiti, like Avey's music, is rife with visceral raw emotion and life-and-death struggles. It's as if the dark complexity, urgency and breakneck pace of Authority Melts From Me comes directly from Avey's sense of the plight, and the fight, of a nation and its people.”
★★★★★ All About Jazz

"Backed by a band that includes saxophonist Miguel Zenón and guitarist Ben Monder, Avey delivers an engrossing listen that, like the best of jazz, transcends borders."
The Los Angeles Times (Album of the Year list)

"He has created a cliche-free work of progressive jazz that's virtually cinematic in its intensity... It's Authority Melts From Me that sees Avey break free as a composer of sophistication and depth."
★★★★½ DownBeat Magazine (Album of the Year list)

"Bobby Avey is one of those young jazz pianists who is not only equipped with high technical ability, but also with a musical understanding that is necessary to give rise out of notes real music that can touch the listener. And that's exactly what he achieves with his new album Authority Melts From Me."
Music an sich

“Composer and pianist Bobby Avey, the young native of Pennsylvania, uses music to make an important statement about the socio political history of the people of Haiti into a tense suite under the meaningful title Authority Melts From Me."
Concerto Magazine

"Bobby Avey’s visit to Haiti proved to be a life-changing experience."
JazzTimes Magazine (Album of the Year list)

"It's as emotionally rich as it is intellectually complex, inspired by the Haitian Revolution of 1791-94, the first time slaves successfully rebelled against their white masters."
Magnet Magazine

"A suite of music that is powerful, not only in the stark originality of the writing, but also in the solidarity it shows for an oppressed people. Bobby Avey is a pianist on a steep upward curve."
★★★★ The Irish Times

"A thrilling ride from the off."
The Jazz Breakfast

"Authority Melts From Me is a rare album in contemporary jazz; a musician using art for controversy; a suite used as a musical beacon against division and repression, with breathtaking instrumental performances."
Musikreviews Magazine

"An intense album with its own character that asks the listener to get in touch with the background of the music as much as the music itself."
Der Hörspiegel

"An intense and brilliant pianist and composer who reaffirms the capacity of jazz music to integrate musical traditions without mimicking them, as well as the social role of the musicians to keep consciences awake."
Jazz Magazine

"You can’t help but wonder where the last hour went. As you restart the recording, you realize that you just don’t care. Some masterful ensemble work."
Something Else Reviews

"This is clearly a deep and rich resource, within and beyond music, given that these rituals fueled by drumming have been practized in some communities on the [Haitian] island for centuries."
London Jazz

"In addition to writing a musical piece dedicated to Haiti, a country, says Avey, whose government, aided by the U.S., “has presided over eight years of human rights abuses,” he is, in addition to making a political statement, hoping “to add something to the legacy of jazz that stays true to the aspirations of that music while incorporating a style that up to now has not been explored in this way.” A style hypnotic, percussive, slashingly dissonant and yet enormously disciplined."
Buffalo News

"Zenón is superb in the quiet, voicelike overtures to his solo on the rhythm-bending, delicately impressionistic Kalfou; Avey unveils his subtlety with dynamics, patience and harmonic imagination on the unaccompanied Piano Interlude; and the climactic Louverture and Cost boil with complex polyrhythms of single-note sax hoots, metallic guitar sounds, and lashed percussion accents."
The Guardian

"Authority Melts From Me is made up of three lengthy pieces—'Kalfou', 'Louverture', and Cost', each running between 13 and 18 minutes—and two three-minute interstitial pieces, one for piano and one for drums. It plays out as a single seamless work, by a band made up of Miguel Zenón on saxophone, Ben Monder on guitar, Avey on piano, Thomson Kneeland on bass, and Jordan Perlson on drums. It shifts, moment by moment, from agitated bursts of counterpoint to spacious solos to almost orchestral swells, always moving forward, restless and impetuous."
Burning Ambulance

"It’s an absorbing quite superb listen, the suite inspired by Haiti’s 1791 slave revolt at its core. A significant achievement."
★★★★ Marlbank

The Whirlwind Artist Page for panist and composer Bobby Avey.

Bandcamp Daily  your guide to the world of Bandcamp